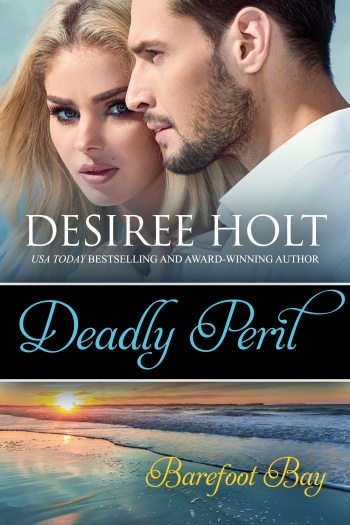 Sometimes in a career life takes a shocking twist…

Which is what happened when financial analyst Robin Hanna discovered her boss was stealing from his clients. Now she’s the FBI’s best witness not only to the white-collar crimes but to the murder of her boss. To keep her safe the FBI ships her off to Casa Blanca Resort and Spa, which already is the site for a witness protection program. But moonlight and magnolias ardent much fun when you’re all alone and frightened.

And sometimes it gives you a real kick in the behind…
Which is what happened when Trey DeMarcus is served with divorce papers the day he retires as a Navy JAG officer. Apparently he and his wife had very different views of his retirement and she wants him to quit dragging his heels so she can get on with her plans.

But Barefoot Bay can work its magic in many ways…
When these two meet there is an instant attraction, tempered with strong reservations. He has lost the ability to trust and she can’t make plans until the bad guys are put away. But there will be a lot of miscues and suspicions before these two final work their way through all the roadblocks…if they can.

She walked along the path slowly, enjoying the sight of the gorgeous landscaping and the sound of the birds singing as they hopped from leaf to leaf. What a paradise this place was.

Too bad I’m not sharing it with someone.

As soon as the thought hit her she banished it. Exactly what someone would that be? Since her last relationship, if she could even call it that, had died of boredom she had buried herself in her work. And of course, when she discovered what was going on at Forrester, dealing with it consumed every bit of her attention. No, no relationships for her until this mess was sorted out and she knew what direction her life would take. The first thing she’d need to think about was getting a new job.

Maybe she’d move. She really had no ties to her current place. Her two closest friends had moved on in their careers, moves that had taken them to different cities. She had no significant other in her life. Not even an insignificant other. Was it time for a career change?

She was so busy talking to herself in her head when she reached the outdoor restaurant and headed for an empty table, she had to quickly move out of the way of the waitress. That led to her bumping into a man seated by himself, just lifting a cup of coffee to his lips. And that led to a coffee disaster on both her clothes and his.

“Oh, my god.” She could feel the blush creeping up her cheeks. “I am so very sorry. Here. Let me fix that.”

Determined to help him blot up the liquid, she reached for the extra napkin on his table and knocked over the full glass of water. So now the table was drenched and his clothes were a soggy mess of coffee and water. She was sure the heat on her cheeks had nothing to do with the temperature in the air.

With the napkin still in her hand, she reached to blot the material from the fabric of his Bermuda shorts then jerked her hand back when she realized it hovered directly over his fly.

“Oh. I-m—“ She thrust the napkin at him. “Here. I think I’d better leave before I embarrass myself even more.”

And then she got a good look at him and nearly fainted. Could you actually imagine someone to life? Because this man looks just like the one she’d been imagining on her walk here from the villa.

He laughed, a low rough sound that brought her back to reality and remade long neglected parts of her body beg for attention. Oh, right. Just what she needed.

“Not a problem. I’ll just run up to my suite and change.”

She figured she’d better get out of there before she humiliated herself even more. She hurried back through the tables until she was away from the deck then raced for her villa. Maybe she could hide in there until whoever that was went home. From his vacation. 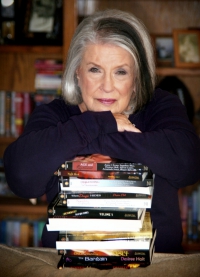 USA Today best-selling and award-winning author Desiree Holt writes everything from contemporary romance to military suspense, with more than two hundred titles to her name. She is a winner of the EPIC E-Book Award, the Holt Medallion, and a Romantic Times Reviewers Choice nominee. She has been featured on CBS Sunday Morning and in The Village Voice, The Daily Beast, USA Today, The (London) Daily Mail, The New Delhi Times, and numerous other national and international publications.